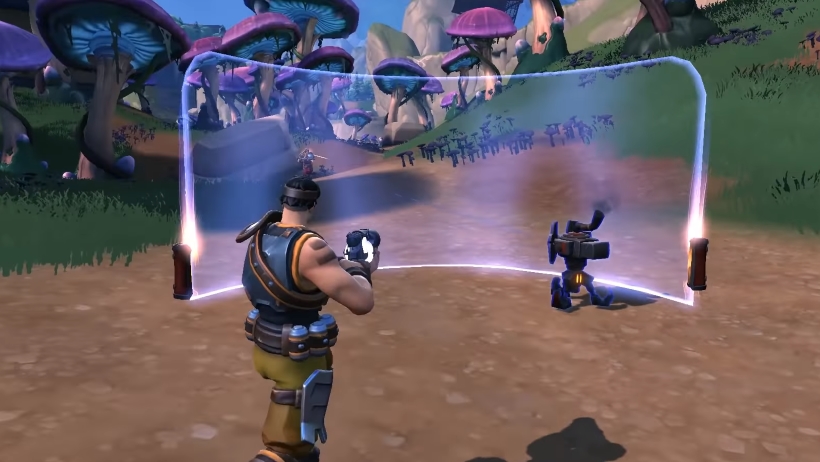 Realm Royale is out now in Early Access and even as an Alpha title it’s doing incredible numbers on Twitch, at one point even topping the charts over the launch weekend. While paying creative tribute to games like Fortnite and PUBG, it’s very much its own thing thanks to a fantasy-fuelled class system powered by steadily upgraded abilities.

One such class is the Engineer, and this character favours dropping shields, turrets and healing devices in order to come out on top in each encounter. In our guide to playing this class we’ve got an overview of all the Engineer’s abilities, along with loads of tips for playing him to perfection.

As the game’s still in early access you can expect plenty of updates to this guide over time. For now though we think this should prove to be just what you need to get started with the Engineer, and hopefully get a little bit closer to bagging those elusive Crown Royales in the process.

When you’re done here, make sure you check out our other essential class guides:

Editor’s Note: We’ve thrown even more tips into the section at the bottom of the page, so make sure you check it out for more ways to help you master the Engineer!

The Engineer possesses an unnamed passive ability that restores five points of armour per second.

Not only does this provide you with an additional protective “barrier” in combat, it also means you don’t have to down quite so many potions, leaving you free to spend Shards on more pressing items such as your Legendary weapon (which, by the way, is a really important craft to get finished as quickly as possible).

Thrust is the Engineer’s core mobility ability, and it propels you high up into the air so you can both fire down on enemies on the ground, or just do a quick scope of the environment in front of you so you don’t wander absent-mindedly into an ambush.

Primarily though, you should use Thrust to gain an aerial advantage over your current target. You’ll find it a lot easier to target them from height, while they will have a much tougher time of things trying to return fire and take you out.

This ability also has quite a short cooldown, so you should use it pretty freely to maintain your advantage in battle.

Fling the Fire Bomb at an enemy target and you’ll not only do some initial damage but also create a pool of fire. If they don’t get out of there pretty sharpish, they’ll continue taking more damage over time. If you can draw your opponent into a confined space before dropping this ability, they’ll be toast before you know it.

Barricade is – surprisingly enough – a defensive shield that will keep enemy fire off you and your teammates. This is a core ability for the Engineer that you’ll make frequent use of, and it goes without saying that this is great for providing added protection for either your offensive Turret or your Healing Totem.

Deploy Turret allows you to place offensive units on the battlefield that will automatically fire upon any opponents that come within range of them. This is an incredibly powerful ability that will both distract the enemy, force them to fight on unfavourable terms and whittle down their health bar remarkably quickly in combination with your other offensive tools.

People tend to pick either Deploy Turret or Healing Totem in their loadouts. This latter ability works particularly well when you’re playing in Duos or Squads as the benefit is multiplied and you can afford to sacrifice a little offense thanks to the presence of your friend(s).

In the solo mode you will gain a lot of benefit by using a combination of Barricade and Deploy Turret. That’s a great mix of offense and defense that should give you a significant advantage in pretty much every match-up.

If you’re struggling with survivability, then it makes more sense to keep the Barricade but swap your other ability over to the Healing Totem. The sharper your shot, the easier it is to sacrifice that sentry damage, of course.

In either Duo or Squad mode, it’s hard to justify keeping the turret over the Healing Totem. You can support your team so much more by providing them with a healing tool. They live longer, which means they do more damage, which means you’re much more likely to bag yourselves that glorious Crown Royale in the long-run.

The Engineer’s Legendary Weapon is the Plasma Launcher and it is absolutely a priority craft for you to get out of the way in the Forge. Not only does this weapon deliver direct-hit damage, it also does around half as much again in splash damage.

The weapon obviously works incredibly well in combination with your Thrust ability, allowing you to take to the skies to gain an aerial advantage before raining down the pain on your victim(s) below.

Here are a selection of Engineer tips that have been uncovered by the community since Realm Royale went into Alpha. We’ll expand on this section over time and as we gain more experience with the game ourselves.

– Combine your Barricade with Deploy Turret or Healing Totem and it’ll be incredibly hard for the enemy to deal with. You’ll be able to get some free healing or damage off, all the while forcing your enemy to reposition or even get a little too aggressive and make the mistake of challenging you in a space where you’re completely in control.

– Your Thrust ability works incredibly well with the Plasma Launcher which isn’t particularly strong when used on the ground like a traditional weapon. Getting some hang time in the air completely changes the way this weapon feels, and allows you to better judge the trajectory of your plasma grenades to devastating effect.

– Follow on very quickly from the point above. When you’re using Thrust as an offensive ability, make sure you’re using it as intelligently as possible. Find ways to fly out of sight, dodge an attack or gain the high ground. Spamming it for the sake of spamming, will result in your movements becoming all too predictable and turns what should be an ace up your sleeve into something that can be used against you.

– Fire Bomb is easily one of the best abilities in the game, so make sure you’ve got one in your inventory when approaching the final stages of a match. It’s brilliant for flushing enemies out of fixed positions or trapping them in an enclosed space so you can close them down and finish them off.

– The Mage’s Ice Block makes them invulnerable and heals them over time, although they’ll be stuck in a fixed position while topping themselves up. Lobbing a Fire Bomb at their feet can force them to either take damage when they finish healing, or make them stay invulnerable for an uncomfortably long time.

– As a general rule of thumb you should find that you have a pretty decent chance of success when going up against Engineers, Mages and Warriors. Make good use of your abilities and you should be able to come out on top. Be a little cagier when it comes to engaging Assassins and other Hunters though – at least in the solo queue where you don’t have secondary support from a friend or two.

– Warriors like to get up close and personal, but Barricade and Deploy Turret should cause them a lot of problems. Height is also your advantage here, as the Warrior simply can’t keep up with your vertical mobility – it effectively negates the exceptional ground-based mobility they themselves possess.

– Keep moving and get your Barricade out earlier to deal with Mages, although do keep in mind that they can pop their Ice Block to get a fair bit of health restored. Never assume the fight’s over here until they’re nothing but a pile of feathers. Again, your vertical advantage should be exploited whenever possible in this match-up.

– Against other Engineers, use your Barricade to block their Legendary Weapon grenades (see below). In general the player who makes the most efficient use of their cooldowns in this mirror match-up will likely come out on top.

– Watch out for Hunters as they can evade and flank around your shield, before getting all up in your face with rapid damage. Deploy Turret will help you out a huge amount in this match-up, so get up into close-range, drop the turret and dish out as much damage as you can as quickly as possible. Use your height advantage too.

– Don’t give Assassins any more favourable (to them) range than you have to. Barricade and Deploy Turret are again your friends here, and keep looking for a height advantage from which you can rain down your grenades.

– While most other classes in the game can’t make use of their weapons while their mobility boost is activated, the Engineer most certainly can (and in fact it’s a crucial part of what makes the Legendary Weapon so powerful).

That concludes the first edition of our Realm Royale Engineer guide. We’ll be updating it over time with more tips and tricks, so bookmark it and check back soon for the second edition!